6/15 Green Blog
Brooklyn, NY
Welcome to the 6/15 Green community garden blog. This is a place where our community can share stories, poems, photos, memories, recipies, and all other experiences of the garden. For information on 6/15 Green, please see the official website. To share information on the garden or communicate with members, please use the member Google Group.

Thanks so much to Peggy Conte for this amazing guest blog post interview with long-time garden member Nitza Wagoner! 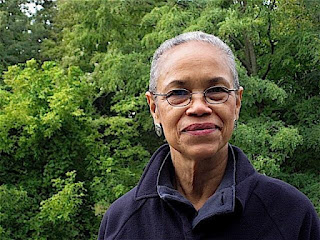 Thank you, Nitza for all you have done for our community! I’d like to ask you a few questions.

Q: Where are you from?
A: I was born in Puerto Rico in a small village called Mala Pascua. One of  9 siblings.
Q: Why do you sometimes use the name Nin?

A: My dad used to called me Nin as a child. I never forgot it.   I use this pen name and my mom’s surname honoring both my parents when I write or create artwork.  (Nin Rodriguez)

Q: How long have you been a member of 615 Green?
A: I have been a member of 6/15 for almost 24 years.  I joined in 1992.  Though I lived in Park Slope since 1977 I rarely ventured into the south slope back then.  It took a trip with Ellen Kirby from BBG to Washington’s Crossing to discover 6/15 Green as we passed the garden in the van on the way back from our outing.  I saw a small crew at work in the community garden as Ellen Kirby gave a short history of the garden movement.  I considered joining.

A: Gardening has always been a passion for me.  I always took charge of a little patch of earth wherever there was one where I lived.  Finding like-minded people in the garden made me feel right at home.   Through the years, strong ties have been formed with gardeners and friendships have evolved.  I enjoy the strong sense of community and the location of the garden is close to home.    The Multi-cultural/social mix has its rewards.  The diversity of neighbors and volunteers is very satisfying. 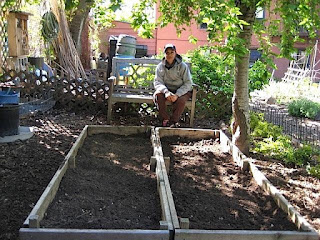 Q: I am so impressed at how community minded you are! You seem to be always doing projects that benefit others. I would like to ask you to talk about the Children’s Garden. Can you talk about the history of the Children’s Garden, and what motivates you to create it and continually improve it?
A: The kids space through the years has been a Sunflower Garden, a Bamboo Hut, and a Peace Garden.

In 2011, I saw the kids playing in a mud hole and I was concerned for the safety/health of the kids digging in the dirt puddle last called a PEACE GARDEN.

I thought a more ample space would serve the children in the neighborhood so I created the SANDBOX shaped in a figure eight.  One circle was designated for continuous play and the other circle was a veggie garden.  Kathleen Cholewka assisted me in creating this active spot.   It’s location near the lawn made it quickly visible and easily accessible.  Kids loved it!!   The project was a success.

In 2012 because of the new building casting much shade into the garden, 6/15 re-designed the layout of the garden.   The sunny, Sandbox was to become the cutting garden.  The former Secret Garden, a spot where children gathered under the Dwarf Cherry Tree that had been formerly stewarded but abandoned was then designated as the future children’s space. After removal of much accumulated castoffs of the garden and debris with help from other volunteers (Anahit, Matthias, Will…) I created a design plan for The Children’s Garden, which was not approved.   The spot became a digging pit shortly after that.

The soil was tested for lead and was closed off and remediated for several months, however, that plan was terminated.   The root systems from the neighboring trees, stone and debris retained in the soil made it almost impossible to complete the task.   I drew up another plan to salvage the area and keep it open for child’s play. I presented my draft to the membership and it was approved this time. I covered the whole area with Heavy Duty Garden Landscape Cloth and changed the layout.  The cloth installation has been completed and the garden is presently open.  It is once again “a very active area!”

Having retired in 2010, I have had some free time on my hands to be creative.  Parents and other garden members work but they wanted a place for the kids to call their own. This work is tedious and time consuming work.  It not being a possibility for them, I decided once again to become the steward of the current Children’s Garden.

My hope for the future is that the children visiting the garden might become the next generation of gardeners and environmentalists saving our open green spaces.  I check in almost daily to make sure the hot spot is safe and “somewhat” organized.  Gardening is a joy.

Q: Can you tell us about the beneficial insect hotel and why you created it?

A: I designed the BIH after I got inspired at a GreenThumb Workshop with Gahl Shottan at the Tranquility Garden where she showed us a few models and instructed us on how to make them.
I thought it would be a good teaching tool to instruct kids about other living “tiny” creatures that inhabit our garden environment.   The hotel will eventually serve as nesting areas for insects during winter months.   There are “residents living” there if you look closely.  The white filling in the twigs and other openings are closed doors.  The insects are at work/rest. 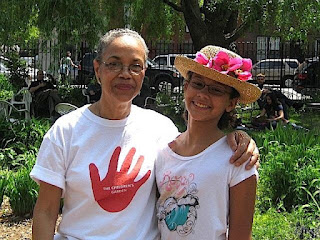 Q: Can you talk about the Open Space Gallery and why you started that?
A: The Open Space Gallery Project was inspired by 9/11.  The garden is a place for respite and relaxation.  I created the gallery, then a Kiosk, to have artist show and share their work in our green space to help us with healing.  We sang Patriotic songs, lighted candles in remembrance and had our first show entitled “The Empty Chairs” in memory of loved ones that passed.   Sharing our feelings about the assault on our homeland was very traumatic.  Inviting the artist community was my way of sharing the beauty still in our world despite this fragmented time of sorrow in our lives.  The kiosk was a distraction.  A structure to keep us focused on what still mattered to us.

Q: What are some other projects that you are currently working on?

A:  I have collaborations with Spoke the Hub--photo shoots of performances in the garden, Earth Matter NY- photo shoots of Community Builds and site specific structures, BQLT- Communications Newsletter Column and a current  Prospect Hill Senior Portrait Series.  These shoots will be exhibited in the garden, on my website or at organization site locations. I am also a Million Trees Tree Pit Steward at NYU Medical Center on 13th Street.

My present dream and goal is to spend time on a work I have yet to complete about my own life, “Mi Vida en Paper” (My Life on Paper).   This labor of love will be a collage of photography and text. Three untitled pieces are in the works. 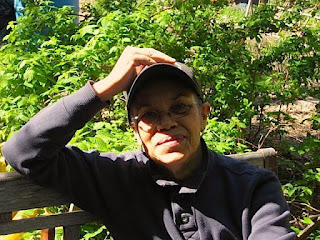